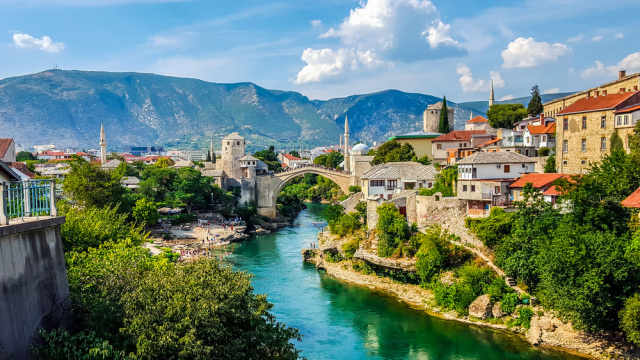 Located in the inlands of Bosnia and Herzegovina, Mostar is known for its Old Bridge, which it is essentially named after, as it translates to ˝Bridge˝. A true miracle of architecture of its time when built by the Ottomans in the 16th century, this stone infrastructure now connects two culturally and religiously diverse areas. With fortified towers on each side, known as ˝Bridge Keepers˝(Mostari) Belebija and Tara, this bridge dominates above the Neretva River with a height of over twenty meters.

While driving along the Adriatic coast from Dubrovnik on this private excursion, there will be a short stop in the medieval town of Počitelj, where there is time to relax and explore. Only 20 minutes southwest of Mostar, it is evident that this historical site is worth the stop before arriving to the final destination.

Once in Mostar, embark on a discovery of the Old Town's heritage, including several historical sites, monuments, a museum and an old Mosque with an optional private tour guide, before strolling through the narrow streets, overflowing with beautiful souvenirs and oriental merchandise. During this free time, it is also recommended to indulge in an authentic Bosnian specialty dish at any of the local restaurants before departing from the historical landmark where the east meets the west back towards Dubrovnik.